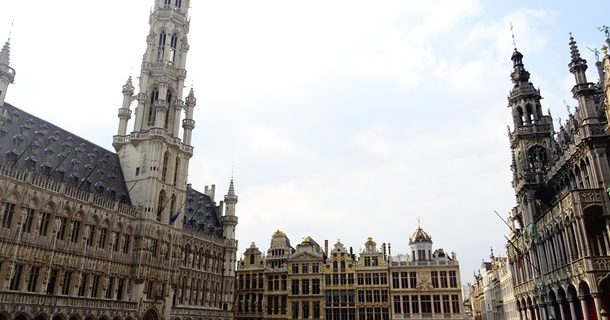 Have you ever been to a city and did not find any kind of connection to it? It feels a bit like “yeah… nice place but…”. Nothing, perhaps even a little bit of disappointment. I recently had this experience with Brussels. As far as I can remember I never had this feeling before. Some cities I like more than the others but that I do not like a city at all is new for more. That is why this article will be about five not so good reasons for visiting Brussels!

You may also enjoy reading about my adventures in Ireland The Grand´Place is more or less the starting point for any kind of tour. Whether you explore Brussels by your feet, bus or public transport system the Grand´Place is the best way to start with. It will blow your mind immediately when you get the first glimpse of it and continues when you stand in the center of the place and turn around yourself. The buildings around the place are the city hall, the guild houses, and the Maison du Roi. They are incredible in its architecture and appearance.

“The Grand-Place is considered as one of the most beautiful places in the world. The Grand-Place of Brussels was registered on the World Heritage List of the UNESCO in 1998.” – www.brussels.be Triumphal Arch impressed me the most. The guide of the sightseeing bus tour said that this is one of biggest arches in Europe. It is situated at the Parc du Cinquantenaire and consists of three arches. At the top of the three triumphal arches, you can see a bronze quadriga and according to visit.brussels, it has an unbeatable sweeping view over the whole of Brussels. The park and the Triumphal Arch were built in 1880 because of the 50th Jubilee of Belgium’s independence and are located in the European Quarter.

Unfortunately, I had not the chance to walk through the park itself. But if you have more than just one day I believe it would be worth it. Especially, if you look for a little time for yourself, some piece and just a calm place. Maybe the most popular icon of Brussels. The Manneken Pis is a symbol for Brussels lack of respect as far as several legends tell. This little statue is from the 17th century, 61 cm tall, and plays a huge role in the annual calendar of the city. At least four times a year he even gets dressed up to celebrate different occasions together with the people of Brussels. His wardrobe consists of approx 800 costumes and can be viewed at the Maison du Roi. By the way, his little sister “Jeanneke Pis” can be found nearby at the entrance of the Impasse de la Fidelité. And their dog “Zinneke Pis” does his business at Rue des Chartreux 35.

Don´t miss some extra facts about “Family Pis”. Get them directly to your Inbox.

Street Art and Comics at walls

Brussels is not only the Capital of Belgium and of Europe but it seems it is also the Capital of Comics. Everywhere you look at you can find some paintings, pictures or comics. At the walls, in the Metro, in the Museums. All over the city statue and paintings of comic characters can be found. I personally love that kind of art and it does not matter if its comics, graffiti or other arts as long as they can be found everywhere in the streets. For Comic lovers, there is a special offer. On the traces of TinTin, Lucky Luke or Asterix the comic strip route leads you to the city center and to 48 different paintings on walls with scenes from different famous comic strips. A map is available at the tourist information for instance at the Grand´Place or at the Metro: Bourse.

If you like to read more about the Comic strip trail, feel free to visit S Marks The Spots to read through a brilliant article about the trail.

Next to the Grand´Place is the Gallery of Saint Hubert situated. It is a 223 m long shopping passage with a lot of small shops, cafés, patisseries and a lot more. The gallery consists the Galerie du Roi, the Galerie de la Reine, and the Galerie des Princes. The glass ceiling was unique in former times and was one of two in 1846 in whole Europe. The whole construction is just spectacular. This is the way to shop around. Other good reasons for visiting Brussels

Of course, these are not the only good reasons for visiting Brussels. But the main ones which I liked the most.

A few other sites, which have to visit are the Atomium, the Place des Martyrs, Basilica of the Sacred Heart, and the European Quarter with the European Parliament etc.

You can reach the most of these attractions very easily as they are within walking distance in the city center. A few are a bit more outside, especially, in the northern part of the town. But no worries, whether you do a sightseeing tour with one of the buses anyway, or you can use the metro system very easily. Five not so good reasons for visiting Brussels

Normally, I love to do these sightseeing tours. Especially, when the different attractions are not within walking distance, it is such a convenient way to get around with a Hop On Hop Off bus and learn more about the city and its sites. That is why I always check if there are possibilities like that. And Brussels has such an opportunity. The City Sightseeing Hop On Hop Off tours are a global brand and I never had a bad experience although I did several tours with them in a lot of cities. And the best is you get a two Euro discount if you buy your tickets online plus a 10% discount if you still have the receipt from a previous tour. Unfortunately, here in Brussels, I had my first and the worst customer relationship experience ever with a sightseeing tour. Why?

Because there is no way to use online purchased electronic tickets at the buses. You HAVE to print it out beforehand. WHAT???? Everywhere else in the world I had a tour with them it was not a problem at all. And here in the capital of Europe, it is not possible??? Obviously, this is nothing for spontaneous travelers as I am or you lose the online discount which is also not nice. Why should I buy the tickets online when it is not possible to go on the bus with them. Therefore, make sure that you print out your voucher before you go anywhere or leave the two Euro discount off the online purchase and buy the tickets directly at the bus or at the tourist information.

Good luck for me that the Marriott and her staff were so friendly to lend a helping hand. They found a way to print out the voucher for me. Then I could exchange it for the ticket in one of the tour buses and could continue the sightseeing tour.

View from the Palace of Justice

The Palace of Justice is an iconic building from the 1860s. Unfortunately, it is under construction at the moment. When I  passed this place by bus I could get a glimpse of a view over whole Brussels which would have been a very cool conclusion of this day. But when I hopped off the bus and went back to the Palace of Justice I did not get exactly what I expected. It was a view, yes, but some roofs in the front shortened the view a lot. It was a kind of disappointing as I had not the whole view. I should have gone to the “Mont des Arts” as it was recommended by another traveler.

Everyone is enthusiastic when it comes to Belgium Waffles. So I thought I have to try one, too. I mean, hey, not that I could prepare waffles by myself but if everyone is so hyped about it I believed I should have tried them at least once. So I did. And it was not the best experience. They were very dry and everything but fluffy as a delicious waffle is supposed to be. Maybe next time I should try one of those Waffles from the Waffle Factory.

The places around the most popular attractions are so full of people that you can barely walk through them. The Grand´Place and the Manneken Pis in particular but also the Atomium are packed with tourists and it is very hard to get a picture or even a glance on it. But that is the way it is. You probably are prepared of crowded places like that. A better choice might be one of the parks to get a bit time for yourself.

Brussels is indeed a beautiful city. No question about it BUT for any reason it did not catches me. I was missing a sort of flair and atmosphere. Probably, I should be careful saying this but on my first impression it felt like a sort of copy of Paris but without this special charm. People from Brussels will hate me when they read this, I believe.

Maybe the time was just too short to find the magic and catch it. I believe with more time, maybe a whole weekend, time to explore the city in more detail and concentrate on different attractions and give them enough time, you will feel a bit more connected to it. It might be a case of fall in love with the second or even third sight. However, I consider going back one day to walk the comic strip walk and find more good reasons for visiting Brussels.

What about you? If you do not like a place at the first glimpse do you give them a second chance? Tell me more about your opinion in the comments. 40 thoughts on “Brussels: Five Not So Good Reasons For Visiting!”