I made it! Yeah! After yesterday´s trouble with the London train traffic and my “tiny” panic attack because of my trip to Colombia, I arrived safe and sound in Medellín.

I even made it to my hostel, in El Poblado*, the neighborhood where I would stay for the next few days.

Colombia is my next step in fulfilling my plan to visit the seven continents until the year 2020 will be over. And coincidently, the 7in7 digital nomad conference is held here as well. I guess, it is a perfect match! So, after my time in Plymouth, this will not be quite a vacation yet! Not fully!

It was an eleven hours flight from London to Bogotá*, three hours stopover, and then another hour to Medellín. I flew with Avianca, which I can recommend, mainly, for long flights. Up to two checked bags per person (wow, and then I come with my small carry-on), entertainment, and two meals (dinner, and breakfast). I have not had that since AirBerlin was not bankrupt yet. The seats and rows are also pretty spacious. 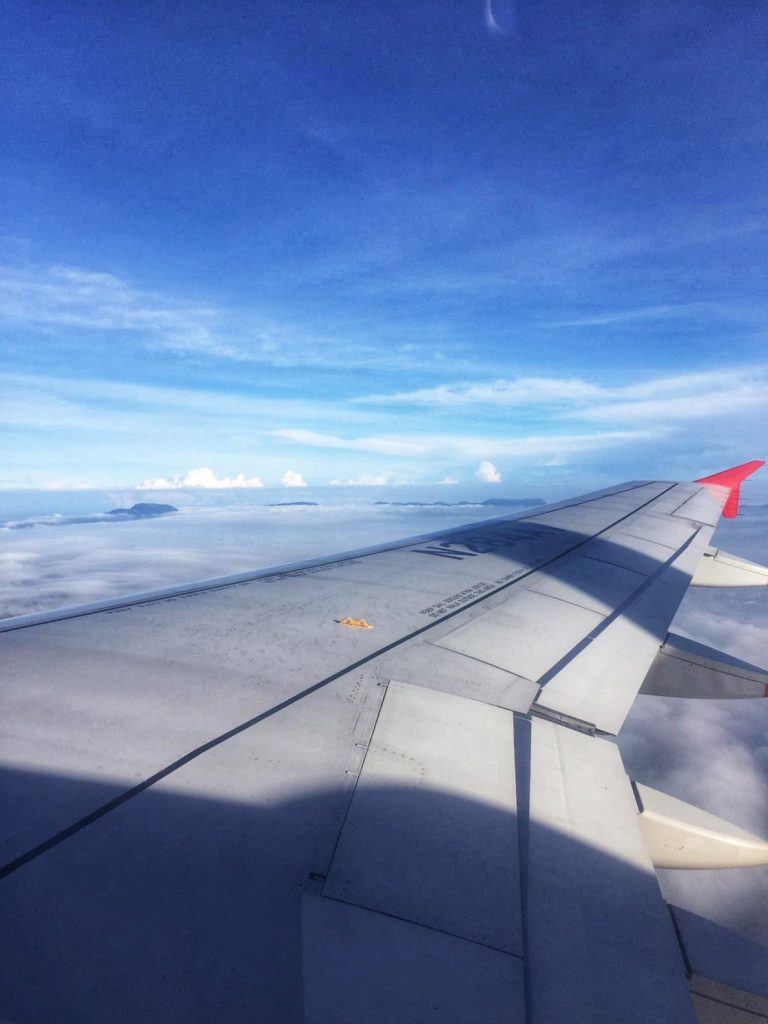 The Airport – Where are all those “Cajeros?”

After all the trouble yesterday, I hoped for a good start! I arrived at the airport in Medellín and was looking for an ATM getting some cash! I asked a guy where to find a “Cajero,” (the Spanish word for ATM) and he tried to explain the direction. Unfortunately, my Spanish is not the best! However, I found it together with a next shock. The ATM did not give out any money! I could not imagine what was wrong. I still had enough limit on my credit card, and also my other cards did not work! Panic again! Would I become stranded at the airport without any money to pay for a taxi?

The second try with another ATM worked out better. I got some cash and the guy who told me, where to find the cash machines, found me again and offered me a taxi ride into the city. Maybe, my luck would come back again? Regarding the ATM, which did not work with my card, it was a Bancolombia one, and I still have not figured out why it did not work, whether at the ATM nor at the bank itself. Any other banks worked fine!

The Airport – How To Get A Taxi?

Ok, so I had some money, and it was time to find a taxi or any other transport! I read through a few other websites, about how to get from the airport into the city. I discovered that medellincolombia.co was very helpful with all possibilities and prices ranges. I wanted to follow the advice, mentioned on this website. But…

The guy I mentioned before, who helped me with the ATM´s, found me again (or followed me?) and tried to explain something! I assumed that he offered me a taxi ride! Suspicious as I am, I could not believe if this was a trustworthy offer, especially, as I did not understand everything. Fortunately, a lady who worked at the airport and spoke English helped us and translated. It seems that he was serious. He wanted to bring me to my hostel for 70 000 COP, which was, as far as I could find out beforehand, a regular price, for transport from the airport. Therefore, I agreed, and soon we were on the way to my hostel.

The first impression, so far, kind and helpful people, but the weather could be better. It was grey and almost dark, and rainy! In Medellín, it rains at least one time per day! I knew that before, but why does it have to rain on my very first day? That is not a good impression! I had the weird feeling that I want to go home immediately!

The hostel was also not the most luxurious one, and I did not know why exactly I booked it (I mean it has some good recommendations, and in the end, it was not that bad, especially, as I did not expect that much. It was enough to find some sleep, although, it was pretty cold during the night, so I needed an extra blanket).

A (Not) So Nice Surprise

Another surprise with the hostel was, that they wanted the money for the room immediately, in cash, and they did not have a working credit card machine (at least, they said so). Great! I had some money, but it was not enough to pay the entire amount plus having something left for the rest of the upcoming days. So the first thing, I had to do, was finding another ATM. This is not the start which I had wished for.

Nevertheless, I could put my stuff into my room, and they accepted to pay it as soon as I go some more money. The rest of the afternoon, I spent searching for a bank. Fortunately, one of the host, who spoke English, explained me the direction to the next available one.

However, I tried to find some good in this first day! As I arrived early, it was not even noon, and I would have had the whole day to do whatever I was up to. So I contacted a friend of mine, who volunteered at the 7in7 and asked her for the plans for tonight. She organized a Tejo meet up, and another one would take place in El Poblado. I wanted to attend one of these meetups.

Finding Another ATM For More Cash

When I left the hostel later, of course, it started raining again. Fortunately, one of the other nearby hotels let me wait in their lobby until the rain was over. I even thought about moving to one of them. But, I also had to keep an eye on my budget, so I just stayed in my hostel.

May it be the lack of sleep, because of the long flight, or the rain itself, but somehow, being in Medellín, did not feel as good as it should be!

When the rain stopped, I continued my chase for some cash and found an ATM from Bancolombia again. I tried it, and once again, it did not work. Ok, so it has to do anything with the bank itself, and not with my card.

Well, in the end, I found a working ATM at Bank Bogotá, near Parque El Poblado. At least, I already got a feeling for the directions in this area.

I also found the restaurant she recommended, the Dharma Vegan Resto, and I ate something. I indeed, suggest eating there, too. Meanwhile, I walked around the neighborhood, I felt a bit better. It is a lively, colorful, and vibrant area, with a lot of bars, restaurants, parks, etc.

On my way, back to the hostel, I bought some water and bananas in a supermarket, so that I had something for breakfast or a snack. The plan was, to have a short nap before heading to the Burger meet up! But, as soon as I fall asleep, I did not wake up before 2 a.m. the next morning. Wow! My body was starving for sleep. I missed all of the meetups with some of the guys from 7in7. Nonetheless, the next day is coming, and I will have my first workshop.